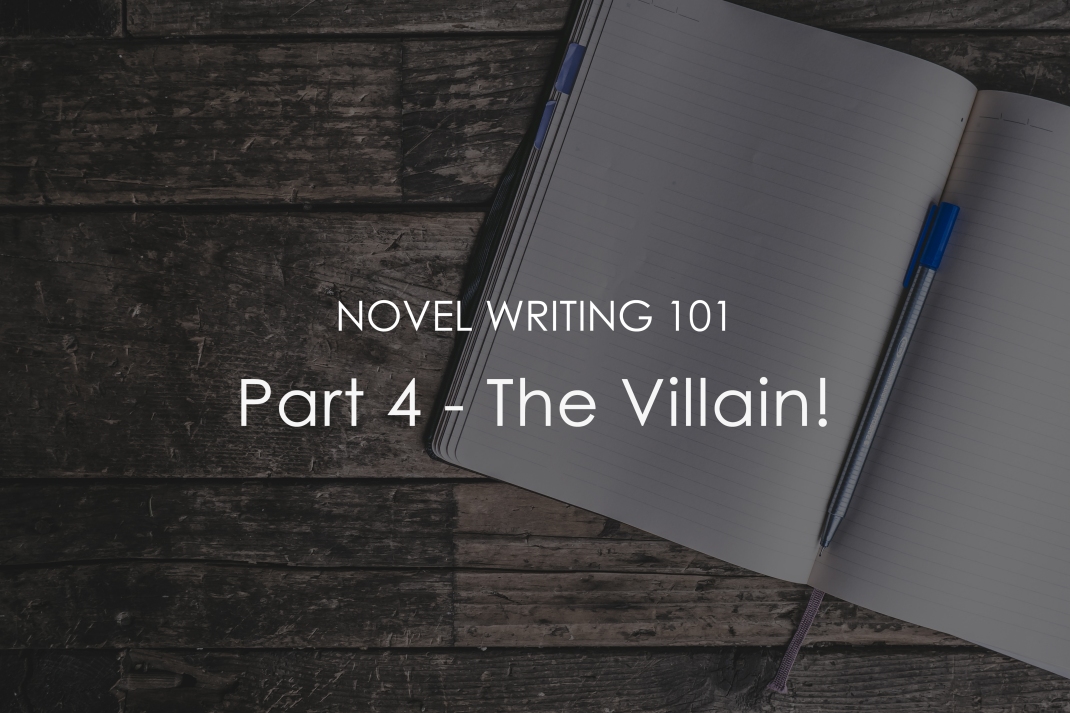 In the last post, we looked at the third part of my Novel Writing 101 series titled: Novel Writing 101 – 3. Character Sympathy. This week we’ll look at my favourite part of any novel, the Villain! Just like every other point I make, the Villain is another one of those truly integral parts of a novel, if you decide to use a villain that is. Some stories don’t need them, but in this case we’ll look at the best way to craft one.

It’s also a good idea if you’re starting out your writing journey to keep things simple and follow either routes when developing your antagonist or villain. For starters, the villain’s flaw is the opposite of your hero’s flaw. For example, if the Hero Ben has the Flaw of being cowardly, then your villain’s flaw could be overconfidence.

If you haven’t already done so, I highly recommend you read one of my previous post: Novel Writing 101 – 2. A Great Protagonist. In that post I talk quite heavily on the above points: Goal, motivation, Belief and Backstory.

Your Villain needs to have a goal, a tangible thing they are striving towards, and something that’s even pushing the protagonist back in their efforts. They also need to be motivated by an emotional feeling. That emotion is linked to a negative belief about their situation, and all of this must sprout from a somewhat tragic backstory.

For example, SPOILER ALERT: In the Harry Potter series, Voldemort wants to destroy all mud-bloods and become immortal, (Goal) because he’s always hated non-magical folk (Motivation) because he believes muggles are lesser than magic folk (Belief) which has all come from his tragic past where his muggle father abandoned his witch mother and left her to die, which inevitably left Voldemort in a muggle Orphanage where he was bullied for being different and unusual.

Like your protagonist, your villain will also have stakes, or things that will go wrong if their Goal is not met. By looking into your villain’s stakes, it gives you good a opportunity to humanise your villain a little. For example, if your villain’s goal is to kill a young child, then what would happen if that child is not killed? Will something terrible happen for the villain that we as readers can relate to? Will that child reign king one day and banish the villain and his race?

No well-designed villain is ever evil or just outright bad for the sake of it. A villain will always have some sort of justified views for their own behaviour. An antagonistic character will always believe they are right in what they are doing. If at any point a villain realises what they’re doing is bad, then you’ve just gone ahead and dethroned them as the villain. Because if they suddenly realise they’re bad, then they should stop doing bad things, right?

If you want to humanise your villain a little more however, you could have a scene in your novel where your villain contemplates their behaviour, but there must be something in there, like a Flaw, that prompts them to continue on their bad but justifiable path.

A great way to inspire antipathy in your villain is to make them act in a way that we as the reader find antipathetic or mean. Nobody likes it if someone is mean to them, and usually we don’t like seeing people being mean to each other.

A good villain is nothing if they’re not feared in some way. “He who must not be named” for example. Even elusive secretive villains who we don’t know about yet should inspire some sort of fear in your readers and protagonist. To be feared is also a form of control over other characters.

Give Them At Least One Positive Trait

In order to really bring your villain to life you should give them something slightly redeeming about them. If your villain is a human or of human intelligence at least, then it’s likely they’ll have some sort of positive trait. Maybe they’re a lover of good music? Are they a good spouse to their other half?

A positive trait like this might not necessarily have a major impact on the plot, but it does give your villain an extra layer of depth and increases that “love to hate” label we put against some villains.

If you read Part 2 of this Novel Writing 101, you may have noticed that the plan to make a Great Protagonist is very similar to making a Great Villain. The villain is almost a little more complex because you almost have to juggle making them antagonistic but ensuring their actions are justified.

I personally find the Villain one of my favourite parts of the writing process, and once you know the best steps to crafting one, it makes the actual writing process later on that much easier.

That concludes Part 4 of my Novel Writing 101. You can read Part 3 here: Novel Writing 101 – 3. Character Sympathy . I’ll try and get something like this done each week to give you guys a better understanding of how I write my own novels.

If you have any questions or want to discuss the ideas above, either drop me a message, or leave a comment below so we can chat about it! Other than that, what things do you do to get your creative juices flowing? What do you think makes a great villain? Who are your favourite villains and why? Let us know in the comments!